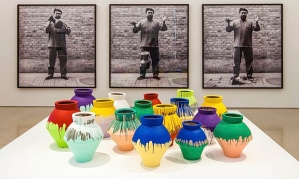 There are many things in life that one feels confident they will never be required to do. For me, one of these things was the need to ever say a bad word about Lego. However this may be about to change as the news hit this week that the Danish construction-toy manufacturers have refused a bulk order for their bricks from the studio of Ai Weiwei. The Chinese artist has used Lego blocks before, creating portraits of famed political dissidents such as Nelson Mandela in an installation at the former site of Alcatraz prison in the San Francisco bay. Weiwei intends now to repeat the trick at Australia’s National Gallery of Victoria, however has been setback somewhat by the company’s decision to reject the sale on the grounds that it, “cannot approve the use of Legos for political works.”

Is it really up to Lego to “approve” what people do and do not make with their product though? Weiwei has not asked for a sponsorship from them, he has offered to pay for the bricks just like everyone else. Lego are assuming a responsibility that is not theirs. As a child, the appeal of their product to me was in the freedom it provided. When playing with Lego bricks the only limit was your own imagination. It appears that this is now no longer the case; rather, the limit is a pre-approved list of the company’s preferred creations. This of course is impossible to enforce, and nobody would buy the product if they were expected only to build the rubbish spaceship on the box. To single Ai Weiwei out as an undesired customer seems to be distinctly unfair.

Lego has not become Big Brother panicking about “thoughtcriminals” and their toy boxes. Look a little deeper into the issue and you discover that this is a company merely protecting its own business interests. Sales of Lego have stalled in its biggest markets of Europe and the US, and as such it is making a concentrated effort to promote the product in China. Ai Weiwei is well known for his criticisms of the Chinese government and was even shamefully arrested by them in a crackdown on political activists in 2011, only having his passport returned to him this year. With Lego’s increasing presence in the country, it is clear that they do not wish to breed a perception of association with the artist by supplying him with materials. It is not the political message in his art that Lego fear, but the artist himself.

This doesn’t shine a particularly better light on the company however. Instead of appearing to enforce a draconian ruling on the use of their product, it is merely a pathetic pandering to the ill will of a draconian government. In doing so, the company has explicitly blocked a creative act, in contravention of what is surely the key aim of their product. Lego’s official slogan is “Play On” after all. Just, not in this case.

Lego could easily have rejected Ai Weiwei’s order for their bricks on genuine moral and ethical grounds however, given that he has a rich history of disrespect for the cultural sensitivities of his materials. For example, in his 1995 work Dropping a Han Dynasty Urn, he did exactly that, smashing it to pieces. Two years later he crassly painted the Coca Cola logo over an urn from the Tang dynasty which dates from somewhere circa 619–907 AD. Weiwei destroyed even more Chinese antiquity in the late 2000s, dipping potentially 7000 year old Neolithic pots in enamel paint for Painted Vases in 2009, and crushing them to dust for a piece in 2008. This was cultural vandalism and an unacceptable act of disregard for his nation’s heritage.

You could say that, as with Lego, ownership of the objects gave the artist the right to do with them as he pleased. However ownership of such antiquity comes with a duty of care. Each of those pots was part of the shared history of everyone in his country, and in term of those from Neolithic times, civilisation itself. By destroying these objects, Ai Weiwei robbed people of a part of their past. Every effort should be made to preserve a nations heritage and if the artist was unwilling to accept this responsibility the urns should have been handed over to a museum, who would have. To deliberately destroy them was a disgrace, and no amount of artistic reasoning can excuse this.

Ai Weiwei has accused Lego of “censorship” in their refusal to provide him with their bricks, but he’s wrong. Lego can refuse to sell to him, but he can acquire the product through other channels and they are powerless to prevent him from creating his installation. He will acquire the bricks too, having set up collection points in cities around the world where people are readily rushing to defiantly donate theirs to his project. So against the wishes of Lego, whatever you make of them, Weiwei will “play on.” Interestingly, he once again will find himself with the collected histories of a group of people in his hands; bricks that people have played with since childhood, learned with and been inspired by. Bricks that may have helped forge brilliant creative and academic minds. This time however, the artist has express permission to re-appropriate these objects in his work. Lego’s actions unwittingly will now provide him with a better, more thought-provoking artwork. I only hope that he will understand why.

-MSc Museum Studies & MA History Graduate, University of Glasgow
-Worked at the Peggy Guggenheim Collection, The Hunterian, Glasgow Science Centre
-Passionate about interpretation and exhibition planning, and advocate of "opening up" museums to their extended communities.